Last week was mostly vacation time in the Eastern part of the country. 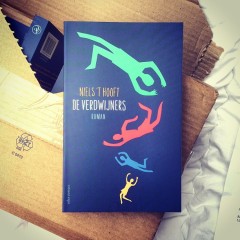 Halfway through the week, though, I received a box of actual printed copies of De verdwijners. The book is real, and it’s here!

This made me very happy, of course. The book feels great: compact and full. The questionnaires inbetween sections look just right. A while ago I felt uncertain about the cover, because designer Roald Triebels had followed my instructions so closely, actually cutting paper like our obvious inspiration Saul Bass, that I was afraid he might’ve come up with something better if he’d just followed his designer instincts. But holding the final book in my hands, everything just clicks.

Besides my happiness about how well it’s turned out, there’s another emotion, which goes something like: OK, so that’s that, now let’s move on to the next project. As other people get to experience the book for the first time, I’m crossing the finish line in a process that took nearly three years. I’ve done all I could to make this good… and now it’s over.

Yes, the promotion of the book is just getting started, but I think it’s healthy to think of that as separate from the creative process. Speaking of which: the first signs of people receiving press copies have started to come in.

For example, Tim de Gier compared me to Robin Sloan and Dan Brown, which is interesting to say the least. (De Gier hadn’t read my book when he wrote this Tumblr post.)

Additionally, ‘Boekblogger’ mentioned receiving the book and called it “een heel apart boek”: the ambiguity of the word ‘apart’ is not lost on me. Finally, ‘Leeswammes’ kind of reviewed it, awarding it four stars (out of five?).

We finalized the date and location for the book presentation, which will be on Wednesday, August 28th at 4 PM, in the Polare bookstore in Utrecht. They appreciate it if you let them know you’re coming, so please do.

Otherwise, work-wise, I finished my retro column for the Dutch Official PlayStation Magazine, about Katamari Damacy. I also wrote a column about Phil Fish, which appeared in nrc.next on Tuesday: Leven in een tijd van internetcelebrity.

My earlier interview with Martin de Ronde of Vanguard Games, about Halo: Spartan Assault, was published on Thursday. It was accompanied by a Harry Hol review. I’ll publish it here later on.

My short review of the expansion pack Civilization V: Brave New World was printed on Friday. Finally, I played and reviewed the entertaining and beautifully titled Rymdkapsel on my iPhone 5. The review will probably be published this week.

Finally, I went to see Elysium in the local cinema. And I rewatched 12 Monkeys, which was interesting after having seen La jetée a while ago. And I decided to check out Mr. Penumbra’s 24-Hour Bookstore, a contagiously optimistic and creative book. Lots of fun. I recommend it to most readers of these weeknotes.