Last week, I wrote a column about the experience of reality for nrc.next, which was published on Tuesday and is online here (in Dutch): Echt, echter, echtst. The paper also printed short reviews of Dota 2 by Stefan Keerssemeeckers and The Wonderful 101 by Rogier Kahlmann, which I edited. I edited a few new ones, too, which will likely appear soon.

I also polished my article about read testing De verdwijners, which is in the paper today. Speaking of the book, it was a relatively quiet week. Some new reviews appeared, mostly positive, often contradictory. It’s interesting how a book’s final third can simultaneously be too long and too short, and how satire can simultaneously be undiscoverable and too obvious. With my read test, I hope to find more solid patterns in what’s keeping the book from fulfilling its potential.

Last week’s biggest media achievement was probably getting my book trailer selected for Bright’s daily ‘Best of YouTube’ thingy, with some very kind words to go along with it. If you haven’t seen the trailer yet, it’s right below. (As of this writing, the video had just passed the 800 view mark.)

I also wrote a retro column for the Dutch Official PlayStation Magazine, about one of my favorite PlayStation 2 games, Shadow of the Colossus. Somehow I managed to fill more than a third of the piece by chatting about two older games that helped shape me as a gamer, Life Force: Salamander and (of course) The Legend of Zelda: Ocarina of Time.

For the same magazine, I finished translating and editing my interview with Adam ‘Keits’ Heart about minimalistic fighting game Divekick. These two articles should appear in next month’s issue, as the currently available issue has my interview with Spelunky’s Derek Yu, a retro column about Katamari Damacy and a sneak preview of De verdwijners.

On Wednesday, I visited Vlambeer to give Wasteland Kings a spin. What a fun game! It’s like Spelunky with guns, including the destructible scenery. Vlambeer may be hyped, but in no way is it overhyped. These guys can even make it fun to blow up static cactuses. (So they do. And so you do.)

After that I visited Digital Dreams, to check out the latest build of Metrico. What this game lacks in viscerality, it makes up for in cerebrality. 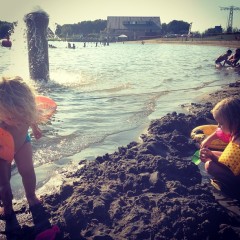 On Thursday afternoon, on one of the year’s last summer days, I went for a swim with my daughters.