Last week was front-loaded: I had to write quite a few articles and prepare for a presentation. Halfway through, the pressure came off, and I tried to shift gears.

Monday was mostly spent on my procedural game techniques article for Kijk, the Dutch popular science magazine. I finished the first draft the next day, and sent it off to my editor and Manuel Kerssemakers of Abbey Games, whom I interviewed for the story. Both provided great feedback before the end of the week; this week I’m doing a second draft that should be much-improved.

Lots of nrc.next game reviewing on Tuesday: a longer piece on Wii U racer Mario Kart 8 and a shorter one on iOS word puzzle game Ruzzle Adventure. I also edited Harry Hol’s mini review of Tomodachi Life. Finally, I was asked to turn my NRC Handelsblad Watch Dogs article (which appeared on Monday) into a proper review. Everything came together in a rather impressive spread on Thursday; princess Peach on her anti-grav motorcycle even made it to the front page. 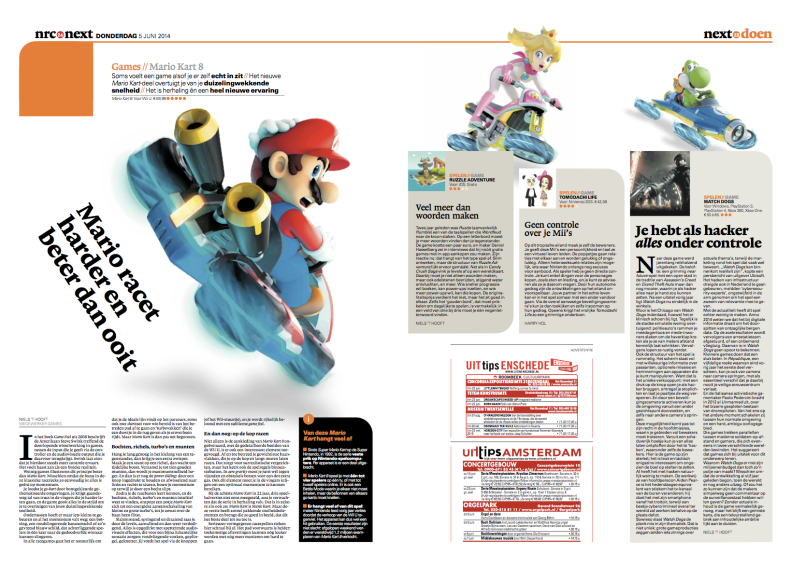 On Wednesday, the second jury meeting of the Creative Industries Fund NL / Dutch Foundation for Literature program Literature on the screen took place. 11 projects were presented live by their creators, and we asked a lot of questions, trying to get to the bottom of each plan.

Two thirds through, I had to leave for an authors’ get-together at my publishing house Uitgeverij Atlas Contact, where Bart Jeroen Kiers, Henk Rijks and I spoke about the current realities of the ebook as well as the infinite possibilities of the digital space. Basically, I talked everyone through my plans for the Hybrid Writer’s Toolkit. A lively discussion followed.

I then cycled back to the Dutch Foundation for Literature to decide which projects would get a grant. I’ve judged game development and story writing contests before, but this committee was on a whole ’nother level. It was fun, educational and inspirational at the same time; the process seemed very well-considered and taken very seriously by everyone, which I felt was heartening.

On Thursday, I gave the sex story I’d given up on the previous week another try. I started from scratch with a new element added to the existing idea, and structured the whole thing pretty tightly. I finished the story over the weekend and sent it off to De Gids. Let’s hope they like what I did.

That night was game development hobby night with Hessel, a.k.a. #thursdev. Sjors and Sander checked in through chat. I worked on my Japanese Village Sim, and made a lot of progress. The game now includes ronin that can be hired to protect your village, and a gang of bandits that attack it. The factions attack each other with arrows. There are still many loose ends, but I believe the core game elements are now present. Which makes this the most complete game I’ve ever created.

On Friday morning, I had coffee with fellow games journo Stefan Keerssemeeckers, and in the afternoon I met up with Bart Wessels of my old publishing house Querido. We talked about hybrid writing and science fiction. At night, I had dinner and beers with Martijn van der Meulen. He’s currently working at Relentless in Brighton and had taken a week off to visit friends and family in The Netherlands.