Last week was short. Monday was day two of Pentecost, an official day off for everyone over here, while Friday was a day off at my daughter’s school. Both days were filled with family matters, and with Wednesday as my usual ‘at home with the kids’ day, only Tuesday and Thursday were left to get things done.

On Tuesday, I visited Two Tribes, where I inspected the recent additions to their next game, and talked about the current story plans. Collin mentioned wanting to announce and show the game at Gamescom in Cologne this summer, which was a bit of a reality check. A lot of to-do’s for the coming 4 sprints, or 8 weeks, including coming up with a name.

I also edited three short game reviews, that didn’t appear in nrc.next on Thursday because of the football world championship. (What? Our games were cut because of a game?!) Hopefully they’ll be able to cram them in later.

The E3 trade show took place in Los Angeles last week, and I tracked – from a distance – the press conferences and other news coming out of there. On Thursday I was interviewed about it by Paul van Liempt on BNR, mostly trying to paint a broader picture of the games industry. The program is available as a podcast; my item starts around the 34 minute mark.

I was interviewed by Jennifer Aardema on Thursday, too. She’s an intern at the Dutch Foundation for Literature and is currently researching the critical reception of digital literary projects like the stuff I’m working on. At this stage, I welcome all opportunities to talk about Ninja Girl and the Hybrid Writer’s Toolkit. To spread the word and to get better at articulating what I’m doing.

That afternoon I finished my grant application for the epic novel I hope to write over the next couple of years. Digital initiatives notwithstanding, the Foundation for Literature still operates on an analog basis, so I had to send them a big box with multiple copies of the application form and my previous novel De verdwijners. If I get a grant, that will help a lot to finally get Sexy Sadie off the ground, a book I’ve been thinking about and working on since 2005.

After that, I finished the second version of my article about procedural game techniques for popular science magazine Kijk. This included coordinating the creation of some custom illustrations by article subject Abbey Games. 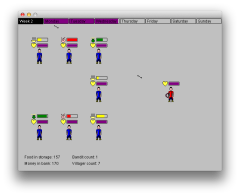 At night I visited Hessel for #thursdev, our weekly game development hobby night. I revised the time system in my Japanese Village Sim, and expanded on the scenario. Most of all, I was confronted with some longstanding bugs; as soon as villagers or bandits start dying, it’s an error message bonanza. I decided I can no longer ignore this…