Last week I put some effort into pitching new articles, including a longer escape room piece, and finally using the interviews David Nieborg and I did in San Francisco with Python inventor Guido van Rossum, and Arjan Brussee of Jazz Jackrabbit and Killzone fame, who announced his new startup last week. 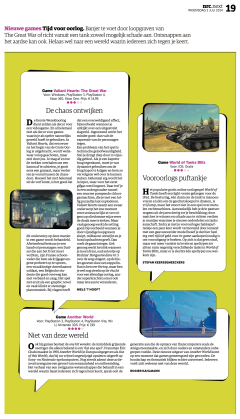 On Tuesday morning I delivered a bunch of reviews to nrc.next. A slightly longer piece on Valiant Hearts: The Great War, which I wrote myself, as well as short ones on World of Tanks Blitz by Stefan Keerssemeeckers and Another World by Rogier Kahlmann, which I edited. That made for a fine page on Wednesday.

After that, I visited the city of Roosendaal to divide travel time between me and my Belgian comrade Youri Loedts, of Official PlayStation Magazine fame. We had lunch and a good conversation.

On Wednesday, I was on the air again, talking about the Verdwijners read test on BNR Digitaal with Herbert Blankesteijn. The full radio show is available online; my item starts around the 17 minute mark.

More read test activity: I shortened my report even further at NRC’s request, to a little under a 1000 words. I hope it’ll be in there soon.

On Thursday, I visited Nintendo’s annual post E3 event in my home town, conveniently allowing me to play the games they showed at the Los Angeles trade show without having to deal with plane tickets and jetlags. I liked paint shooter Splatoon and Super Mario spin-off Captain Toad, and was interested in the Project Giant Robot and Project Guard prototypes, that are quite far off from finished products.

Beyond the work stuff, I saw The Raid 2 and Edge of Tomorrow in the movie theater, continued reading The Truth About the Harry Quebert Affair by Joël Dicker and Apocalyps by Arnon Grunberg, saw Ben Folds performing with a live orchestra in Eindhoven, and watched football, obviously.