After the previous week’s heavy news, and not feeling all that well, I tried to take it easy last week. I cancelled a bunch of meetings and delayed some deadlines.

I did have to turn in my monthly Official PlayStation Magazine copy, so I wrote two articles over the weekend: a profile on Ubisoft Montréal and a column on a mecha game that takes Skylanders to the next level (the column is called Wishful Thinking and involves me dreaming up games I feel should be made).

Also, on Tuesday I got up way too early to talk about the Dutch Game Awards on NPO Radio 1, and on Thursday I met up with Nik Wouters of NOS for an item about the recent crop of major bug-filled games. 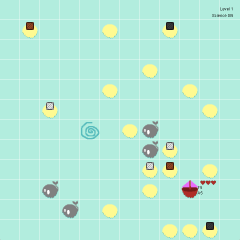 I used #thursdev, my weekly game development hobby night with Hessel Bonenkamp, as well as two additional nights, to work on my sea exploration game idea. It’s turning into a bit of an ode to 868-HACK, but with a grid that grows a step for each consecutive level. It’s still very basic and random, with placeholder art, but some interesting stuff is happening already.

On Friday, I sat down to write the first few pages (about a thousand words) of my next novel Sexy Sadie. I’d been thinking about these for a long time, and I couldn’t resist any longer. I think I found a pretty good solution to frame the whole story, that opens up some new possibilities, too.

Finally, I listened to a lot of Gorki after hearing of Luc De Vos’s death. Gorki was a major influence on my first two novels Toiletten and Sneeuwdorp, and I even named my firstborn after one of De Vos’s songs. I decided I ought to listen to these albums more often while writing the next book.