Last week I did a bunch of work on my NOS op 3 report, collecting ideas and sketching out concepts following my month-long stay there last year; I’m close to finishing it now. My editor at KIJK gave me some leeway on the 3D graphics article, so I was able to not do much on that without feeling terrible. I also didn’t write anything for the paper, although I did send off a handful of proposals.

Monday afternoon, I visited Judith Meinetten and Kim Kamphuis at the Hogeschool Utrecht to discuss a plan I’ve been thinking about for a while: prototyping my next novel Sexy Sadie by talking through the story in front of a live audience. I want to iterate on the book before I even write it. Seems like it’ll actually happen this March, with a group of students. (Hopefully I’ll be able to do it a couple more times after that, so I can iterate on the prototyping too.)

Tuesday morning, I met with Peter de Jong at Codeglue in Rotterdam. We discussed the upcoming Hybrid Writer’s Toolkit project and Geometry Girl pilot, which Codeglue will be doing the development of, and also Antegods, a new game they’re working on. I may be able to help them with that too. 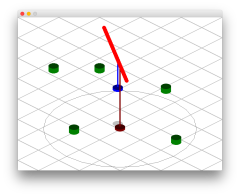 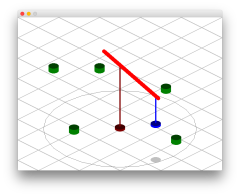 Wednesday afternoon, I started a little game of my own, which is really just a tiny Game Maker prototype so far. It’s an isometric simulation of a crane, for which I had to relearn how to calculate triangles (sinus! cosinus!), and figure out some other hard things, which went surprisingly well. I continued with the idea that night during #hobbydev, my weekly game development hobby night with Hessel.

On Thursday I put together a revised financial plan for the Hybrid Writer’s Toolkit, which was requested by the Creative Industries Fund NL. They’re planning to subsidize the project, but not with the amount I’d asked for, so I had to change the budget to take this into account.

Friday morning, I did some work on Two Tribes’ RIVE, and then went off for a long weekend in the Ardennes with friends. An excellent idea.