Last week was a short week (and a funkily numbered one, 222 weeks after I started this thing), as I returned from the snowy Ardennes late Monday afternoon. I was quite tired afterwards, and not super-productive, coincidentally skipping significant beats on my 10.000-steps-a-day goal. 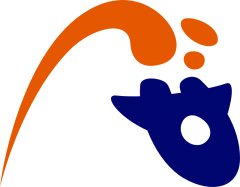 I decided to focus on the next version of this site, including a new logo. Both site and logo have been in the works for a while, and this time I brushed up on my bezier curves and beat the logo into shape. I’m sure I’ll tweak it more, but this is the basic vignette; also note the darker color scheme.

As you can see, it’s a crashing starship, referring to my sole proprietorship, Anticlimax, which was named after a ship in an old comic book of mine. I hardly ever use that name in the wild, but I like the idea of expressing the underlying self-mockery more broadly.