That was a weird week. An emotional rollercoaster, as they say. My wife was away to prepare my father-in-law’s funeral with her mother and sister (he’d sadly passed away the previous week) as I took care of the kids and did some random work things: joining a Radio 1 item on escape rooms, chatting with Menno, tinkering with an OKR-like system and trying (and failing) to finish a blog post again.

And then there was the TEDxDelft talk that my wife’d insisted I’d still do. There was a coaching session on Tuesday, dress rehearsal on Thursday, and the event itself on Friday. And lots of practicing around that. 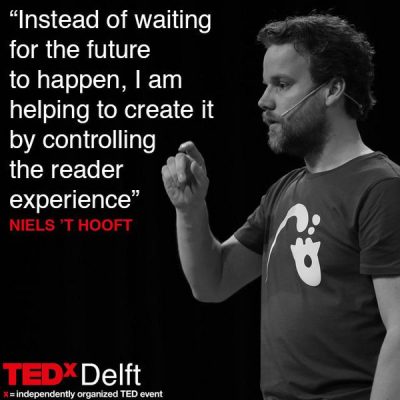 The version on stage was better than any version before, perhaps even perfect, if it weren’t for a few slide-related things I was in disagreement about, and forgetting to leave my prop (a pirate chest, obviously) on stage, bumping into an off-stage door as I carried it away. I’ll be sharing the video vehemently when it’s online; there already is a written report, and someone made a sketchnote-y thing.

Finally, after being sequentially sad, angry, happy, nervous, calm, tired and energetic all week, the funeral on Saturday afternoon was a beacon of quiet. My father-in-law was buried in the middle of a forest, beams of sunlight breaking through the canopy, onto his coffin. We didn’t want to see him go, but as he had, this seemed like a proper way to say goodbye.