Last week, completed entries of my De verdwijners questionnaire continued coming in. If you’re planning to join my research project, you should hurry up: I want to start analyzing the results early next week. So the (soft) deadline is set to Friday, October 4th.

Normally, as an author, you get surface comments from friends and family (“I liked it”, “I could never write a book myself”) and deep comments from a select group of reviewers, who usually have quite specific ideas about literature. So it’s been wonderful (and fascinating) to get in-depth feedback from a much broader audience for once.

The results seem to all over the place. If they show anything, it’s that (if there was any doubt left about this) a singular truth definitely doesn’t exist in this universe. De verdwijners is various things at the same time: wonderful and atrocious, depending on whom you ask. Too fast and too slow. Plot-heavy and utterly plotless. Highbrow, lowbrow.

It’s not always easy to be on the receiving end of this. Negative comments feel like punches in the gut. It’s become a bit of an addiction to check out the results, hoping the latest entries are positive. If they’re not, it colors my day. Ultimately, though, I can see the big picture, and it’s all worth it. I think.

What else was up last week? Monday night, I drank a few beers with Arjan Terpstra, a fellow games journalist. It was good to catch up.

On Tuesday, I visited Martijn van Best at Dutch Game Garden, to prepare for a piece on the many Dutch games that were to be shown at Indigo later last week. The article appeared in nrc.next on Friday, in shortened form due to space constraints.

That afternoon, I joined the not-insignificant group of people who were invited for a De wereld draait door item that was ultimately canceled…

On Wednesday, I met up with Sjors Houkes, to borrow some of his Moebius books and discuss the progress of the upcoming Toiletten app, which he is providing the voice track for.

That afternoon, I joined BNR Digitaal on live radio for the third time, to discuss SteamOS, which was just announced.

On Thursday, I caught up with Robert Gaal, who currently resides in New York City and was in The Netherlands for a bit. 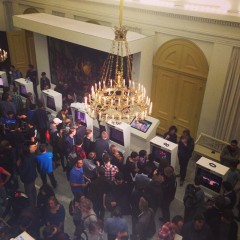 That night, Good Night #12: Game Night happened, where Willem Sjoerd van Vliet read poems and I read a short story for the happy few in attendance. I also talked about the making of De verdwijners.

On Saturday, I visited Indigo.