Last week was all about Ninja Gimmick Girl 2.0, the iPad novel I’m trying to get funded. I nearly finished my Dutch Foundation for Literature grant application, with help from Peter de Jong at Codeglue and Tim Hengeveld, who created some sketches to go along with the application.

Simultaneously, Codeglue and Sjors Houkes continued their work on the Toiletten app, which is nearing completion. Most of what’s left is some additional text material. When it’s done, it still has to be submitted to Apple, so it might be a while before my first app is in the App Store.

I also got started on the analysis of my De verdwijners survey, although I couldn’t spend as much time on it as I would’ve liked. First of all, I crunched some of the quantitative data I collected, trying to find interesting patterns. Well, splitting the results between age groups and frequent/unfrequent readers didn’t lead to much; perhaps my data set is just too small. However, I did find a noticeable difference between gender groups.

With the quintessential first question, ‘Do you feel it’s a good book?’, I deliberately offered four choices so people wouldn’t be able to pick a safe average. Well, as it turns out, most people like the book to a varying degree, and while the average appreciation is about the same, males seem to be more extreme in their opinions, replying with a straight-out ‘yes’ or ‘no’ more often. At the same time, I didn’t count a single female ‘no’ (among 62 respondents, split pretty evenly in the gender department). 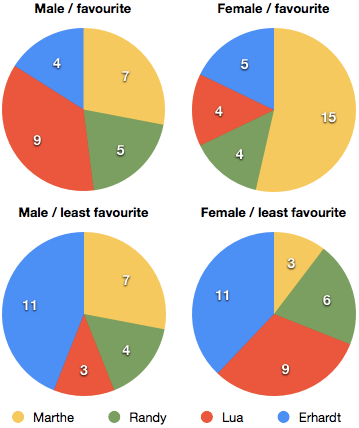 In the responses about readers’ favourite and least favourite character in the book, a clear (and fun!) pattern emerges. Poor Erhardt is unpopular with both gender groups, and the opinion on Randy is rather non-plussed. But when it comes to the female characters, the opinions start varying wildly. The depressed Marthe is disliked by males, liked by females, while sex-and-violence addict Lua is liked by males, disliked by females. Who’d have thought?

Let’s keep it at that for this sneak preview. More soon!

On Tuesday afternoon, I visited Sander Blom at Uitgeverij Atlas Contact, to talk about Ninja Gimmick Girl. After that, I visited the NRC offices with Arjan Terpstra, where we discussed the future of our games journalism efforts with Mark Duursma and Stijn Bronzwaer. Finally, I updated David Nieborg on the NRC situation, after which we chatted about our various other occupations.

On Wednesday, I visited the Taskforce Innovatie office in Utrecht to discuss an upcoming project.

On Thursday, I did an interview with my friend Geert Nellen at Digital Dreams (check out their neat Moebius-ish new logo), which will appear in the next issue of Official PlayStation Magazine. I also received a review copy of the Nintendo 2DS, which is certainly a fascinating piece of equipment. Over the weekend, I played Pokémon Y on it.

On Friday, I had lunch with Bram Ruiter, and after that, not much else. Tired!

On Sunday, I had an extra work day, but headed home early. Our house had finally bowed to torrential rains torpedoing the facade from the south-east, and water had started leaking from somewhere between the new third floor and old second floor. We drilled a few holes in the ceiling to prevent all liquid from being absorbed by the plasterboards. Two or three more liters dripped into a bucket, which were then ditched in the toilet.

Finally, I wrote something about George Saunders’ The Semplica Girl Diaries.