Last week was rather short, as Monday was part of the Dutch extended Easter holiday. Still adjusting after last week’s rejection, I cleared up a lot of notes and email, and tried not to do too much else. I played Child of Light, too, which is beautifully handpainted but also kind of boring, unfortunately. 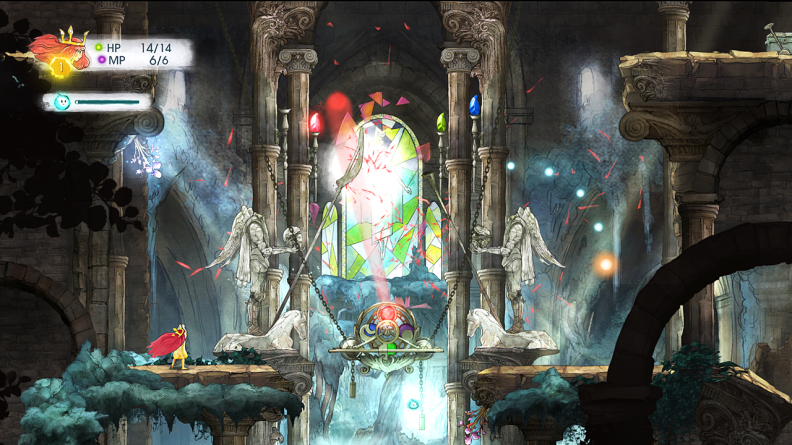 On Tuesday, I edited three game reviews for nrc.next, which were published on Thursday: Trials Fusion by Rogier Kahlmann, Final Fantasy XIV (the PS4 edition) by Harry Hol and Hearthstone (the iPad edition) by Stefan Keerssemeeckers. That afternoon, I took a train to Leiden to hang out with friends.

On Thursday, Maarten Westerveen of VPRO radio visited me at my home to record a conversation on artisticity and writing in games. I’m curious to hear how the item turns out.

That evening, it was game development hobby night with Hessel. I continued work on my Japanese village strategy game, spending too much time on menu buttons. (So it goes.)

On Friday, I did an interview with Daniel Hasselberg of MAG Interactive, the company behind word game Rumble/Ruzzle, that’s about to launch Ruzzle Adventure, a Candy Crush Saga-ish singleplayer take on the original game. Daniel was in Amsterdam for The Next Web, and he talked to me about having a hit, building a company and the responsibility to create more hits.

After that, I had lunch with Tim Hengeveld. It’s always good to exchange ideas and inspirations with a fellow story guy.

In the afternoon, I put my interview with Triumph Studios’ Lennart Sas online, which I did a month ago (in Dutch): “We hebben de oude fans teruggevonden” – Triumph geeft zelf Age of Wonders 3 uit.

At night, I visited Escape Room in Bunschoten with Kars, Zuraida, Sander, Tim and Bart. These real-life spin-offs of ‘escape the room’ adventure games are currently popping up all around the country, and from what I heard, this is the best yet. We definitely enjoyed ourselves, but talking about it during our Chinese dinner afterwards (with a game designer ratio of at least fifty percent), it became clear that there are still many creative venues left to explore.