Last week I manned up and got the results of the Verdwijners read test out of my system. Nearly a year ago I asked a group of people to read my near-future ideas thriller and fill out a questionnaire; I’d been working on a report on and off since then, but couldn’t crack the nut. Now it was finally time.

One obstacle was the notion that the test would be the starting point for some kind of Verdwijners spin-off: a rewrite, or a series of short stories. I got rid of this a while ago, deciding that instead of a new beginning, the test results would mark the end of my active work on this novel.

For a long time, I wanted to create an overview of all the reader responses as part of the report. I’d already spent a lot of time on this, yet there was still much more to do. It was also hard to make a balanced selection: at times I felt I was just trying to make myself and the book look good. So instead, I opened up the Google spreadsheet with all the results, for those that really want to see.

Another thing that helped was wrapping everything into a clear structure: a top 10 list of ‘learnings’. It’s a cliché for sure, but it worked for me; once I hit upon this idea, everything came together. And I got to 10 quite naturally, too.

It was still a monster ‘side project’. I spent a few days and evenings copying ideas from earlier drafts of the report, drafting a rough outline, filling in the gaps, polishing. And then there were the infographics, that were a lot of fun to do, but took extra long because I have so little experience with them.

I finished the thing on Wednesday night, and sent it off to some friends and colleagues for feedback. I figured the newspaper would no longer be interested a year after the fact, but I still sent them a link to the preview version. It turned out they did want to publish a version, and quickly too.

So on Thursday, I found myself rapidly compressing a blog post of 3.500 words to 1.500 for nrc.next. But hey, it was in there on Friday (with interesting looking infographics, that unfortunately lost some of their readability). 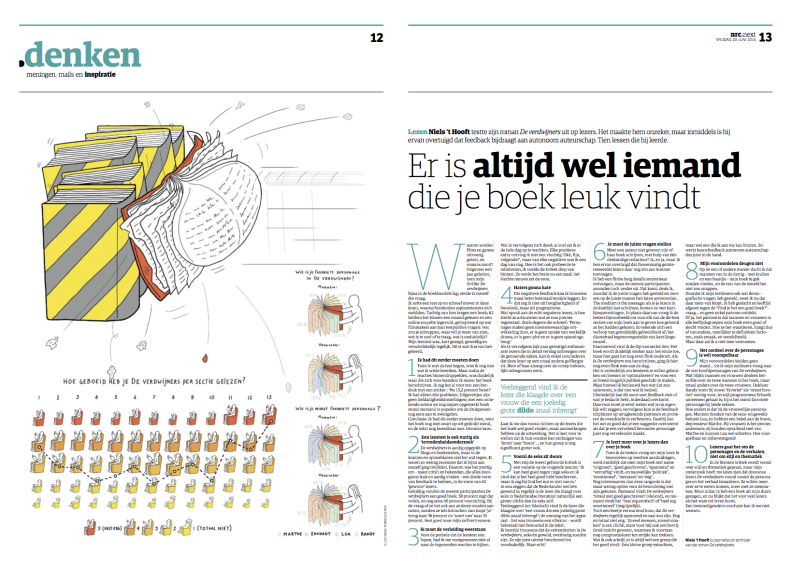 After that, I brought back all the good changes from the compressed version to the original post, implemented some feedback, and put it online (in Dutch): Geweldig, verschrikkelijk en heel erg leerzaam – 10 lessen uit De verdwijners-leestest.

Otherwise, it was an uneventful week. I did publish two longer game reviews on this site: Amusante speeltuin voor zogenaamde hackers about Watch Dogs and Mario’s meesterlijke momentum about Mario Kart 8.

And I edited a few short game reviews for nrc.next on Tuesday; on Thursday, three were published: Murdered: Soul Suspect and Borderlands 2 for PlayStation Vita by Rogier Kahlmann, and WildStar by Harry Hol. Finally I wrote an article for NRC Handelsblad, about physical and social games, mainly the ‘escape the room’ phenomenon, which was published yesterday.

There was no weekly game development hobby night a.k.a. #thursdev, because Hessel just had a baby, and Sander was about to get married. Yay for having babies and getting married!