I didn’t mention last week that the new issue of KIJK came out, featuring the first article I ever wrote for it, about Flappy Bird and other games’ success and addictiveness. You can check it out through Blendle. KIJK was one of the first magazines I loved as a kid, alongside Donald Duck and Power Unlimited, so it’s awesome to be able to write for it. The next piece has already been approved.

Otherwise, last week was characterized by planning ahead. I did a bunch of Sexy Sadie outlining and prepared for Bright Ideas, Official PlayStation Magazine and NRC articles, but didn’t finish a lot of them, although my piece on Dota 2 and The International is in today’s NRC Handelsblad. I worked on it for more than a day, and still wasn’t completely happy with it. Sometimes writing is hard…

I also played and wrote about Mountain and Civilization Revolution 2 on iOS. And I edited the review of Sniper Elite 3 by Rogier Kahlmann. The three of them appeared in nrc.next on Wednesday. 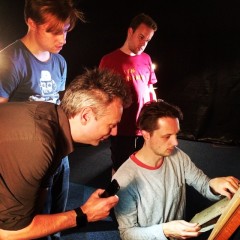 On Monday night, I visited the real-life escape room Russian Time-Bomb in my home town Utrecht, with Zuraida, Iskander, Eelco and Kars. It was rather lo-fi compared to the one in Bunschoten we’d been to before; I’m visiting two more before I write about this trend. The photo to the right was made by Zuraida, featuring me in a red shirt and baffled state.

On Tuesday, I visited Two Tribes, where we brainstormed titles for their upcoming 2D space shooter. Once or twice I thought we had it, to later find out we didn’t. In all, the game still carries the working title Rewind, which is no longer appropriate as the rewinding element has been removed.

Thursday evening saw #thursdev continuing, my weekly game development get-together, done remotely because Hessel is in newborn mode. I spent some time redesigning my Japanese village simulation on paper as a single-hand iPhone game, planning to start over with the art and code entirely. I also gave it a proper working title: Sato (Japanese for village).

Over the weekend, I visited Jurjen Tiersma in Assen, just like I used to do in the old days. We talked, watched football, drank beer and even danced for a minute.